Rather than continue with the hex-based style of wilderness travel, I am going to use a Pointcrawl system. I feel this will speed up travel during the game. The following articles will familiarize you with the system.

Essentially, there will be Sites that are connected by Paths. I will assign travel times based on FUZZY time segments, called Nodes (distance modified by terrain, roads, mounts/wagons, and/or encumbrance, usually around 6-8 hours). Random encounter checks will happen once every Segment, rather than once every hour, or whatever time frame I had been using.

Note that overland, an encounter may result in the addition of a Site, such as a shrine or a sub-Path leading to some other Site (if it does not make sense that the Site would be on that particular path). 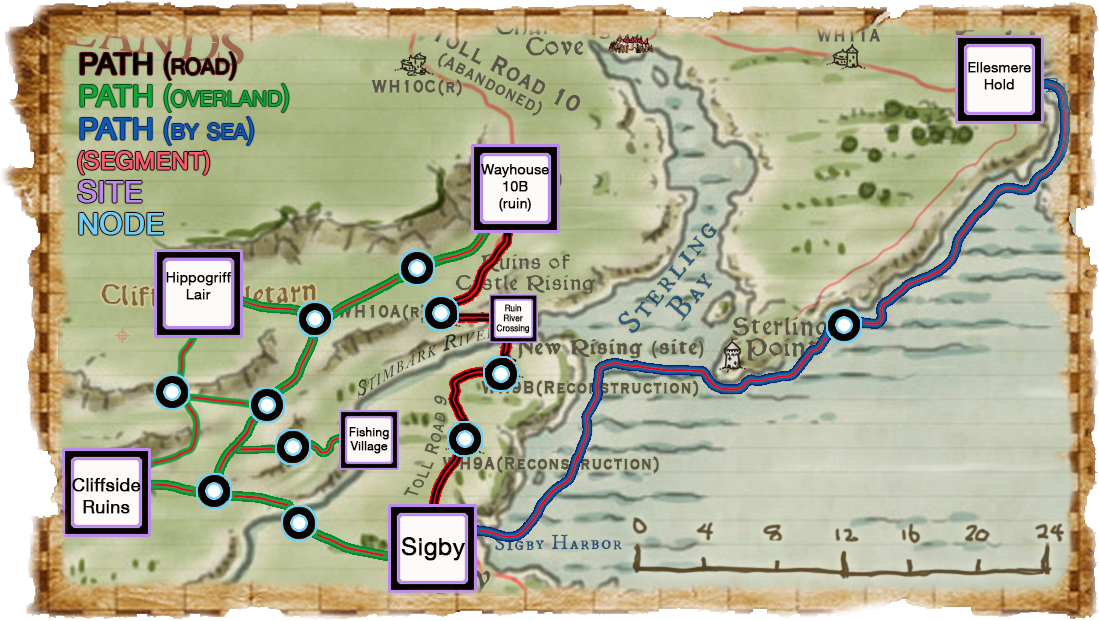 The party can alter their Path at any time, so don’t think of this as railroading but an attempt to make things more efficient.

Anytime the party leaves a distinct path, they risk getting lost. Note that I will be using this system for City Crawls as well, and in this case the “Path” would likely be main streets or routes that have been given to the party, either through directions or maps.

Once at a Site (after any encounters or exploration there), I will give you options of new Paths departing that Site (based on any exploration and successes on Detection skill checks).

The standard size of a hex is 6 miles, thus large hexes are 24 miles. Travel is based on an 8 hour day, which we will call a Watch. Hence there are 3 watches during a day. Using a second Watch for travel is possible, even a third… but there will be consequences.

Assuming a regular terrain, a party of adventurers can travel 13 km (8 mi) in a watch, or 39 km (24 mi) in 3 watches (24 hours), but this space and time equivalence is an abstraction since it’s not impossible to continuously march during 24 hours (continuous march.) In reality the total travel time in a day is 8 hours of discontinuous march, as well as 8 hours of sleep and 8 hours of diverse activities (food, rest, hunting, setting up camps, cleaning weapons, repairing equipment, exploring the terrain, surrounding impassable areas, preparing spells, etc.), all of them discontinuously distributed between 3 watches, or 24 hours.

The attempt here is to abstract travel time, not to get caught in the minutia of nit-picky detail. I think this will make things more fluid and fun for all of us.

The following are websites that inspired me:

by: PhoenixMark
See All Pages

I'm sorry, but we no longer support this web browser. Please upgrade your browser or install Chrome or Firefox to enjoy the full functionality of this site.